The ANCSA corporation for this area is Bering Straits Native Corporation.

Click here to view the full-size version of the menu.

Unalakleet (/ˈjuːnələkliːt/ YOO-nə-lə-kleet; Inupiaq: Uŋalaqłiq, IPA: [uŋɐlɑχɬeq]; Russian: Уналаклит) is a city in Nome Census Area, Alaska, United States, in the western part of the state. At the 2010 census the population was 688, down from 747 in 2000. Unalakleet is known in the region and around Alaska for its salmon and king crab harvests; the residents rely for much of their diet on caribou, ptarmigan, oogruk (bearded seal), and various salmon species.

Unalakleet is also known for its aesthetic value. It is located next to the Bering Sea and the large, clean Unalakleet River. The landscape also has trees, tundra, and hills behind it.

Unalakleet is an adaptation of the Iñupiaq word "Una-la-thliq",[3] which means "from the southern side".

Unalakleet is located at the Norton Sound end of the Unalakleet-Kaltag Portage, an important winter travel route between Norton Sound and the Yukon River. Unalakleet has long been a major trade center between the Athabascan people, who lived in the interior of Alaska, and the Inupiat, who lived on the coast.

In the 1830s Russian explorers and traders came: The Russian-American Company built a trading post here at Unalakleet. In 1898 the United States arranged for Sami reindeer herders from Lapland to be brought to Unalakleet, to work with the people about herding practices. In 1901, the United States Army Signal Corps built a 605-mile (974 km) telegraph line from St. Michael that passed through Unalakleet.

Unalakleet is located on the Norton Sound of the Bering Sea at the mouth of the Unalakleet River, 148 miles (238 km) southeast of Nome and 395 miles (636 km) northwest of Anchorage. Unalakleet has a subarctic climate (Koppen: Dfc) with considerable maritime influences. Winters are cold and dry. Average summer temperatures range 47 to 62 °F (8 to 17 °C); winter temperatures range from −40 to 11 °F (−40 to −12 °C). Precipitation averages 14 inches (360 mm) annually, with 41 inches (100 cm) of snow. Despite its coastal location it has minimal seasonal lag, and December is the coldest month.

Unalakleet first appeared on the 1880 U.S. Census as the unincorporated Inuit village of "Oonalakleet."[6] All 100 of its residents were listed as Inuit.[7] It was listed in the 1890 census as "Unalaklik." Of its 175 residents, 170 were Native, 3 were Creole (mixed Russian & Native), and 2 were White.[8] It was listed again as Unalaklik in 1900 and in 1910 under that name, although the latter census also listed it as spelled Unalakleet. Since 1920, it has been recorded in the censuses as Unalakleet. It was formally incorporated in 1974.

There were 224 households, out of which 46.9% had children under the age of 18 living with them, 47.3% were married couples living together, 21.4% had a female householder with no husband present, and 21.9% were non-families. 18.8% of all households were made up of individuals, and 5.4% had someone living alone who was 65 years of age or older. The average household size was 3.33 and the average family size was 3.82.

Unalakleet is the first checkpoint on the Norton Sound in the famous Iditarod Trail Sled Dog Race, some 851 miles (1,370 km) from the start in Anchorage. The first musher to reach this checkpoint each year is awarded the Gold Coast Award, which includes $2,500 in gold nuggets. Unalakleet also plays an important role in the Iron Dog snowmobile race.

Unalakleet's local schools include Unalakleet School, a K-12 school that is internally divided into Unalakleet Elementary, Unalakleet Middle School, and Frank A. Degnan High School. The combined school population of Unalakleet Schools is 195, 180 of whom are full or part Alaska Native.

Unalakleet schools has a Gifted & Talented program. The school's students also participate in Academic Decathlon, Battle of the Books, as well as other academic programs.

Unalakleet Airport is a central hub for outlying villages, providing air cargo and air taxi services. It is served by daily airline service to Anchorage by Ravn Alaska, along with frequent cargo services by Everts Air Cargo and Northern Air Cargo. Daily flights to Nome and outlying villages are made by Bering Air, Ryan Air, and Ravn Connect (under Ravn Alaska).

Unalakleet health services are provided by the Anikkan Inuit Iluaqutaat Sub-Regional Clinic, a division of Norton Sound Health Corporation, based in Nome, Alaska. The clinic has permanent staff including medical providers, certified health aides, behavioral health specialists, and a pharmacist. It also hosts specialists in other fields regularly throughout the year.

Restaurants and other food services

Unalakleet boasts several dining options: 1. Peace on Earth. This locally owned and operated restaurant, located in the southern part of town, is well known for its pizzas. It also offers a variety of salads and sandwiches. Peace on Earth frequently hosts music nights with local and visiting artists.

2. Igloo. Located in the heart of the town, this offers a selection of burgers and other sandwiches, and coffee and mocha beverages.

3. Unalakleet Native Store. A convenience store and gas station located in the northern part of town.

Under ANCSA the state was originally divided into twelve regions, each represented by a "Native association" responsible for the enrollment of past and present residents of the region. Individual Alaska Natives enrolled in these associations, and their village level equivalents, were made shareholder in the Regional and Village Corporations created by the Act. The twelve for-profit regional corporations, and a thirteenth region representing those Alaska Natives who were no longer residents of Alaska in 1971, were awarded the monetary and property compensation created by ANCSA. Village corporations and their shareholders received compensation through the regional corporations. The fact that many ostensibly Alaska Native villages throughout the state were not empowered by the ANCSA to form village corporations later led to a number of lawsuits.

The regional and village corporations are now owned by Alaska Native people through privately owned shares of corporation stock. Alaska Natives alive at ANCSA's enactment on December 17, 1971, who enrolled in a Native association (at the regional and/or village level) received 100 shares of stock in the respective corporation. In 2006, the 109th Congress passed S.449 which amended ANCSA, and allowed for shares to be more easily issued to those who had missed the enrollment, or were born after the enrollment period[3] by reducing the requirement for voting from a majority of shareholders to a majority of attending shareholders at corporation meetings.[4]

Text of the Act

The Act lays out the specifics of the corporations' status. Here is an excerpt of the relevant portion:[5]

(a) Division of Alaska into twelve geographic regions; common heritage and common interest of region; area of region commensurate with operations of Native association; boundary disputes, arbitration. For purposes of this chapter, the State of Alaska shall be divided by the Secretary within one year after December 18, 1971, into twelve geographic regions, with each region composed as far as practicable of Natives having a common heritage and sharing common interests. In the absence of good cause shown to the contrary, such regions shall approximate the areas covered by the operations of the following existing Native associations:

(4) Association of Village Council Presidents (southwest coast, all villages in the Bethel area, including all villages on the Lower Yukon River and the Lower Kuskokwim River);

(8) Aleut League (Aleutian Islands, Pribilof Islands and that part of the Alaska Peninsula which is in the Aleut League);

(11) Kodiak Area Native Association (all villages on and around Kodiak Island); and

(d) Incorporation; business for profit; eligibility for benefits; provisions in articles for carrying out chapter. Five incorporators within each region, named by the Native association in the region, shall incorporate under the laws of Alaska a Regional Corporation to conduct business for profit, which shall be eligible for the benefits of this chapter so long as it is organized and functions in accordance with this chapter. The articles of incorporation shall include provisions necessary to carry out the terms of this chapter. 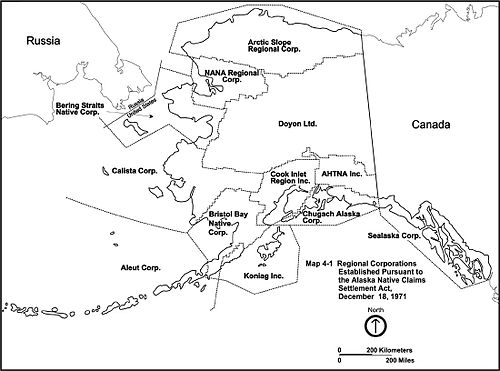 The thirteen regional corporations created under ANCSA are:

There are over 200 village corporations, corresponding to the list of villages published in the text of ANCSA. Most corporations serve a single village, though some smaller villages have consolidated their corporations over the years.

The federal Indian Self-Determination and Education Assistance Act of 1975 (ISDA) gave self-autonomy to both Native Indian tribal governments and to ANCs.[12] 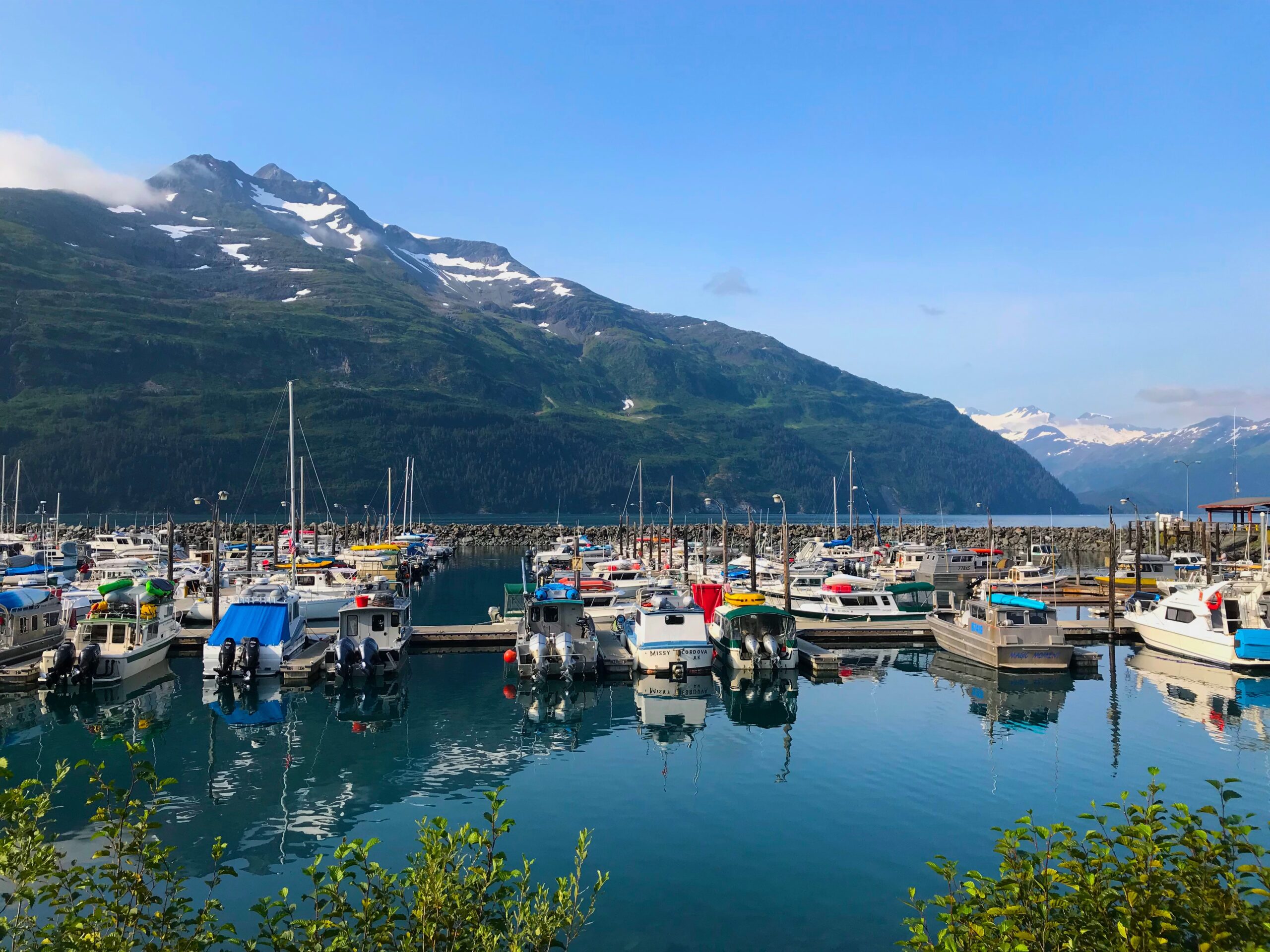 This tab contains maps and location information for Unalakleet Native Corporation and the surrounding area. Native Alaskan organizations
0 feet
Compare
Save to a List